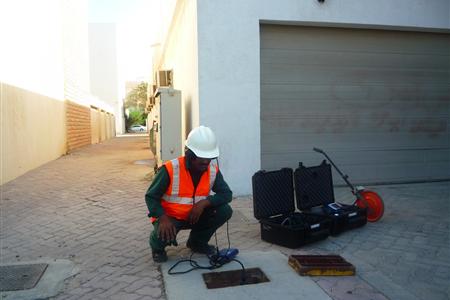 Correlators do not directly seek the point of highest sound intensity, but a consistent noise source. It is relatively unaffected by background noise. It has two sensors, or accelerometers (transducers), which are placed on fittings such as hydrants or valves on either side of the leak, and uses the technique of crosscorrelation to determine the difference in time between the leak noise reaching the two sensors. The noise is converted into electrical signals, and a comparison made of the signals, searching for similarity. When the correlation is achieved, a display shows a typical high amplitude peak. The time delay for this peak to be produced is measured by means of a calibrated time trace. Figure below explains the simple mathematics involved in the correlator calculation. One of the parameters used in the calculation is the velocity of sound within the particular pipe material. The apparent velocity is affected by the pipe material. As a pipe becomes ‘softer’, the apparent speed of sound within it becomes slower. It is also affected by the diameter of the pipe. As leak noise travels away from the leak, down the pipe wall in both directions, it is attenuated by the material of the pipe. In the case of softer, plastic materials, this attenuation results in the absorption of the 57 higher leak noise frequencies, such that the further away from the leak that the noise travels, the more it is dominated by its lower frequency component. In early correlators, correlation was difficult on nonmetallic pipes because sensor technology was inadeqaute to correlate at low frequencies. The latest correlators incorporate sensors with an extended low frequency response, which has enabled correlation to be performed on all types of pipe material. Current instruments now do all the mathematics themselves, and automatically give the leak position, also calculating the actual speed of sound in that particular run of pipework if necessary, thus enabling the operator to build up a picture of the actual pipe velocities in a particular area, and to work where pipe details are not known. The development of the LNC has continued. The new generation are smaller, easier to use, have extended operation range due to more sensitive sensors, and some have the signals digitised at source and automatic filter optimization.. They do not require a dedicated vehicle, and can be operated by one man because the signals are transmitted by radio. This has made the LNC more flexible, and it has become the ‘workhorse’ of leak pinpointing. The use of hydrophones (sensors coming into direct contact with the water via standpipes, hydrant outlets etc.) enables correlation on sounds of lower frequency and lower intensity, and at a greater distance. This is of particular help with plastic pipes and in rural areas. In conclusion, it may be said that the LNC offers: • Accurate leak location in high ambient noise • Location of leakage with relatively low acoustic output • Location within systems containing few fittings for direct sounding • About 90% trial hole accuracy with consequent excavation/backfilling/ reinstatement cost reductions • No need for an educated ear (though machine use training is very important).